In today’s competitive world the electrical insulation materials and the processes are viewed with tremendous cost and quality consciousness. Varnishing of electrical machine winding forms a major part of the total cost of the electrical insulating materials. With the increasing costs of energy and solvents for use in varnishing, it has become a need of the hour to look into the change in the conventional impregnation methods such as Dip and bake varnishing or the Vacuum impregnation.​

On this background Trickle impregnation technique was evolved to improve the varnishing quality coupled with reduced cost. This technique is now well accepted and used for impregnating stators / fields and armatures / rotors in all the advanced countries.

According to the principle of Trickle Impregnation, activated resin is trickled in a thin jet on to the rotating preheated winding. The resin immediately gets heated and its viscosity is reduced. Due to the rotary motion of the winding the resin gets distributed evenly inside the winding without any drain loss. The heated winding accelerates the gelling and curing of the resin.

The resin applied on the winding is quickly sucked through the slots. Assisted by the capillary action it pushes out the trapped air from the small voids and gaps in the winding and penetrates evenly in all the voids. 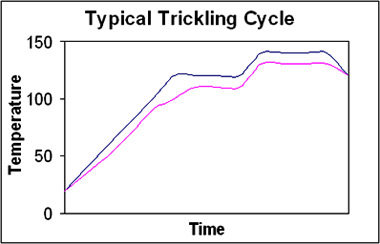 
The trickle impregnation plants with the above features are custom built taking into account several factors such as production rate, size and shape of the component, type of trickle resin etc. 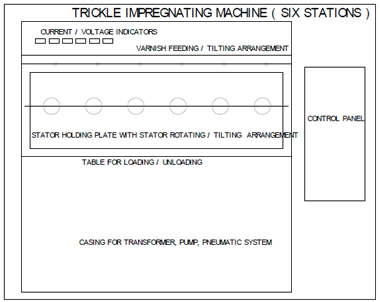 It is ideal for stators of A. C. motors. Depending on the production rate the quantity of the spindles can be decided. 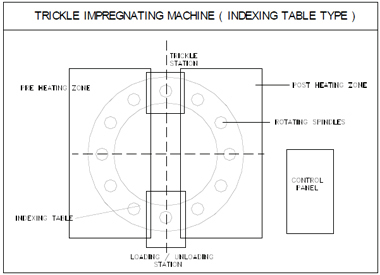 It is ideal for medium size stators and rotors e.g. armature and field coils of hand tools, auto electrical, household appliances etc. High production rates of 60 to 120 jobs per hour are possible with these plant 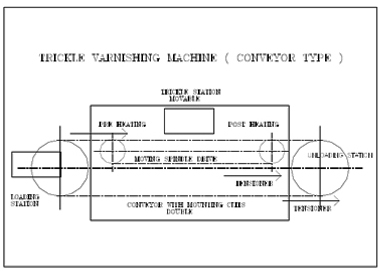 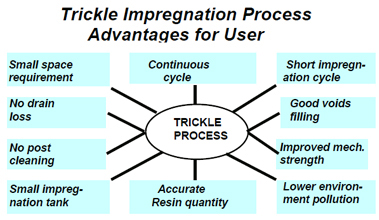